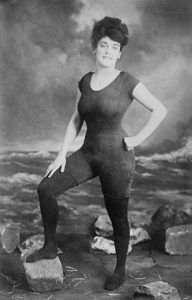 Sydney-born, in Marrickville, Annette Kellerman was ahead of her time in many ways, including her small but significant contribution to motion pictures in their early, developing years of 1909 to 1924. During this time she starred in a dozen films, at least two of them being quite significant, and most of them showcasing Annette’s remarkable feats in the water.

This is her story:

Suffering in her childhood from a weakness in her legs requiring steel pins for support, Annette began swimming as therapy to overcome her disability, and by the time she was 15 years old she had mastered all swimming strokes and won her first race.

This quickly led to bigger and greater things such as being the first woman to swim a 42 kilometre section of the Thames River in London, swimming along the English coastline, and attempting to swim the English Channel three times. Although she failed all three times, she attracted much attention and became a celebrity, drawing crowds that were stunned and amazed by her diving and underwater swimming feats.

By 1907, at age 20, Annette was already an international star, successfully performing vaudeville acts at the London Hippodrome and then in New York, Chicago and Boston. Her act featured exciting high diving and stunt swimming, underwater dancing in a glass tank and a water ballet routine which marked the introduction of synchronized swimming.

Not only could she hold her breath for a long time, Annette had a well-formed female figure that looked even more beautiful with her precise yet elegant and graceful movements. She was called a mermaid due to her underwater swimming skills and attractive figure, and her great popularity was quickly seized upon by a burgeoning new industry: motion pictures.

The year 1908 marked a significant change in the way the new technology of moving pictures developed. From a gimmick shown in amusement parlours called nickelodeons, a ‘narrative film’ with a story was developed, only ten to twenty minutes in length, but they firmly set the foundation for the entertainment movies we enjoy today.

It was at this exciting and early time of fast development in the motion picture industry that Annette Kellerman starred in four such short films in 1909, produced by the Vitagraph Company, one of the main producers in the USA at that time, and within a few years, when ‘feature length’ films running over an hour began to be made, Annette worked for the new Fox Film Corporation in several productions.

One such outstanding production was a three-hour Fantasy extravaganza filmed in exotic Jamaica. Entitled A Daughter of the Gods, it was the first production to cost over a million dollars. But the film’s main feature and attraction was without a doubt a significant number of nude scenes by Annette in which only her long flowing hair delicately covered her breasts and pubic area, thus causing quite a sensation in an era where cumbersome bathing suits covering most of the body were still the norm! Nevertheless, A Daughter of the Gods was still a success, and the film is now remembered as her biggest hit.

Several other motion pictures starring Annette in similar aquatic fantasy stories were filmed in other exotic locations such as Bermuda, and her final film, Venus of the South Seas made in 1924, has yet another special feature, namely one reel (usually about 20 minutes) filmed in colour and underwater! It was the last film made using the Prizma color system which used two colours, red and green, instead of the three commonly used now and introduced in the 1930s. Such colour scenes in silent films of the 1920s were not uncommon, but combined with the beautiful location in New Zealand, and it is fortunate that this is the only film starring Annette which has survived in its complete state. Segments of footage of some others survive in various film archives, but there is always the hope that some lost and forgotten films are rediscovered one day.

With the help and support of her manager-husband, Louis Sullivan, whom she described as a great friend and the best husband a woman ever had, she extended her talents even further by writing and lecturing. She wrote two books for women: How to Swim (1918) and Physical Beauty and How to Keep It (1919), and lectured throughout Europe and America, only returning home to Australia when her fame had faded, although her name continued to be known by every Australian of that generation.

Annette Kellerman was a great feminist idol and role model for young women in the early decades of last century, as well as a pioneer in aquatic sports and nudity in motion pictures. She revolutionized women’s swimwear, and showed women by her own example that there are no boundaries for what women can do. She was a vegetarian and never drank alcohol, and was never afraid to face any obstacle. Perhaps her disability as a child gave her this inner strength and determination to be fit and healthy, and even take on the world, which she did. She was one of Australia’s first international stars, making waves with her daring one-piece swimsuit and tasteful nude scenes in the 1916 epic, A Daughter of the Gods.

Annette has been honoured in a 1952 movie about her entitled Million Dollar Mermaid, her name is on a star on the Hollywood Walk of Fame, and in 2002 and Australian award-winning documentary entitled The Original Mermaid about her was produced by the ABC.

Annette Kellerman was born on 6 July 1887 in Marrickville, a suburb of Sydney, and she died on 5 November 1975 at the age of 88 in Southport, Queensland. Her ashes were scattered over the Great Barrier Reef.

Her silent films in chronological order are: